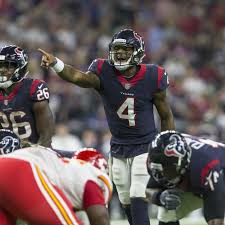 The Jaguars reached the AFC Championship game in 2017 on the back of their defense, which ranked 2nd in the league in points allowed. The Jacksonville stop unit was led up front by Calais Campbell and earned the nickname Sacksonville with an 8.8% sack rate (2nd). However, much of the damage was against backup quarterbacks and Campbell himself recorded 9 of his 14.5 sacks versus just Houston and Indianapolis. Jacksonville became the first team since the 2013 Seahawks to hold opponents under 5 yards per pass play and they also led the league with a 4.1% interception rate. However, there have been 25 teams in the last 5 seasons to gain more than 100 points in expected points added from interceptions, including the Jaguars last year, and those teams averaged just 73 points added from picks the following season, which is exactly the league average. Furthermore, Jacksonville’s defense experienced a league-leading 19% swing in fumble recovery rate luck from 2016 and is unlikely to be as lucky recovering fumbles this season.

Great defensive seasons are often the result of good fortune in combination with good talent and the correlation of year-to-year points allowed on defense in the NFL is only half of the year-to-year correlation of points scored, which illustrates how much of a team’s defensive performance is out of their control. So, while the Jags’ defense may be just as talented as a season ago, their performance level is very likely to regress towards the mean and that defensive regression is one reason they enter this season a bit overrated.

The Jaguars’ offense was built around RB Leonard Fournette, who had seemingly solid statistics but finished with less than 4 yards per rush, ranking 28th among qualifying running backs. Blake Bortles rated about average last season in our pass efficiency numbers, but he benefitted from big leads in many games, which allowed him to attempt the fewest passes since his rookie season. Our quarterback model has Bortles ranked 23rd heading into 2018 and I expect the Jags’ offense to finish in the bottom half of the league. The Jaguars went 9 years without a winning record before nearly reaching the Super Bowl last season but without any exceptionally dynamic players on offense and a defense in line for some regression, it looks like they will take a step back this year.

Deshaun Watson rated as our 12th-most efficient quarterback in his rookie campaign before tearing his ACL in practice. Houston went 3-3 with Watson starting compared to 1-11 without him under center. Watson was pressured on a league-high 48% of his dropbacks, but the Texans added three new offensive linemen in the offseason to protect their young quarterback. Senio Kelemete comes over from New Orleans after allowing the fewest pressures of any guard with at least 300 pass blocking snaps in 2017. Zach Fulton didn’t surrender a sack all last season in Kansas City while playing center and will move to guard for 2018. Seantrel Henderson hasn’t seen consistent starting time since 2015 when he was one of three tackles to allow less than 20 pressures (min 300 pass blocking snaps). Watson was spectacular when kept clean last year, averaging 8.7 yards per pass play (2nd) and a 9.5% touchdown rate (1st) – more than double the league average of 4.4%.

Houston’s defense surrendered 7.1 yards per pass play in 2017 (30th), but they should improve drastically in limiting opposing quarterbacks this season. Former defensive player of the year J.J. Watt and fellow linemen Whitney Mercilus missed most of last year with injuries, but now the Texans will have to the two All-Pro pass rushers back in the lineup alongside Jadeveon Clowney, whose 64 pressures in 2017 ranked 14th. Houston enters this season with perhaps the most dynamic pass-rushing trio in the league. Houston’s pass defense will be bolstered further by the addition of another All-Pro in safety Tyrann Mathieu and former Jaguars’ nickelback Aaron Colvin, who allowed just 0.76 yards per cover snap from the slot last year (4th).

We have the Texans ranked top 10 on both offense and defense for 2018 and firmly the third-best team in the conference. Houston plays the second-easiest schedule according to our metrics and should make the playoffs in Deshaun Watson’s sophomore campaign.

The 2017 Titans went 9-7 and won a playoff game, but mostly through smoke and mirrors as they had a negative point differential against one of the league’s softest schedules and credit the front office for firing mediocre Mike Mularkey. Tennessee went on to hire the inexperienced Mike Vrabel at head coach and I expect him to lean on his assistants heavily this season. Vrabel’s Houston defense allowed the most points in the NFL in his only year as a defensive coordinator but, to be fair, they dealt with numerous injuries to top players. Tennessee added former Patriot Malcolm Butler to their secondary in the offseason, the cornerback most famous for his goal-line interception in Super Bowl 49 and his inexplicable benching in Super Bowl 52. Butler has improved his yards allowed per cover snap every year he’s been in the league and should be a top 25 cornerback playing across from Adoree’ Jackson, who surrendered only 0.98 yards per cover snap in his rookie season (33rd among cornerbacks).

Matt LaFleur is Tennessee’s new offensive coordinator after working with the Rams last season. LaFleur was on the coaching staff during the best pro/college seasons for Matt Schaub (2009), Robert Griffin III (2012), Everett Golson (2014), Matt Ryan (2016), and Jared Goff (2017). Our QB model ranks Marcus Mariota as our 19th most-valuable quarterback heading into 2018 and I believe LaFleur is the right coach to help him turn-it-around after a sophomore slump. One of Mariota’s main threats on the outside will be Corey Davis, who battled injuries and was disappointing his rookie season. There’s reason to believe the former 5th-overall pick will improve, as wide receivers drafted in the top 10 average a 1.0 yard per target increase in their second season (based on data since 2010). Tennessee’s ground game looks strong with Dion Lewis and Derek Henry, both of whom finished in the top 10 in rushing success rate last year. Overall, we have the offense ranked 21st with a high ceiling considering the combination of Mariota’s potential and LaFleur’s quarterback track record, and the defense ranked 22nd with a low floor considering Vrabel’s inexperience. The Titans will likely miss the playoffs in an improved AFC South, but their games could feature significantly more scoring and excitement than they did under Mularkey.

Andrew Luck is 43-27 as a starter and he’s had to carry his team to most of the victories (3rd all-time averaging 273 passing yards per game). The Colts made the playoffs in Luck’s first three years in the league before injuries derailed his career and, despite playing 2016 with a torn labrum, the Colts have still never posted a losing season with Luck under center. Yet, Indianapolis has one of the lowest win totals in the league because people are nervous about Luck’s injury risk. Luck played 11 series in the Colts’ first three preseason games with no sign of injuries bothering him and he says his “shoulder feels awesome”. I expect Luck to benefit greatly from analytically-minded former Eagles offensive coordinator Frank Reich coming in as head coach. Luck has a similar skillset to Carson Wentz and Reich plans to run the same aggressive, up-tempo offense. Indianapolis used first and second round picks on guards to protect their franchise quarterback and improve a ground attack that ranked 25th in our metrics last season.

Reich brought in Matt Eberflus to coach the Colts’ defense after spending the past seven seasons in Dallas as the linebackers coach. Eberflus will have a tough challenge turning around a secondary that allowed 7.3 yards per pass play in 2017 (31st) and lost its best cornerback from that unit. The good news is the defense should have former first-round safety Malik Hooker available for the full season. Hooker had 3 interceptions in the first 7 games of his career before tearing his ACL and MCL. The pass rush was also a problem, as the Colts finished with just a 4.65% sack rate (29th). Jabaal Sheard’s 5.5 sacks led the Colts in 2017 but he was better than his sack numbers suggest, finishing 13th among edge rushers with 66 quarterback pressures, and Indianapolis also drafted Kemoko Turay in the second round to boost the pass rush. We have the defense ranked near the bottom of the league with several question marks in Eberflus’s first year as an NFL coordinator, but the offense has tremendous upside pairing an analytically-driven coach with one of the league’s most talented quarterbacks and I lean over on Indianapolis’s win total.